Andaman and Nicobar Islands, union territory, India, consisting of two groups of islands at the southeastern edge of the Bay of Bengal. The peaks of a submerged mountain range, the Andaman Islands and their neighbours to the south, the Nicobar Islands, form an arc stretching southward for some 620 miles (1,000 km) between Myanmar (Burma) and the island of Sumatra, Indonesia.

The arc constitutes the boundary between the Bay of Bengal to the west and the Andaman Sea to the east. Port Blair (on South Andaman Island) is the territorial capital. 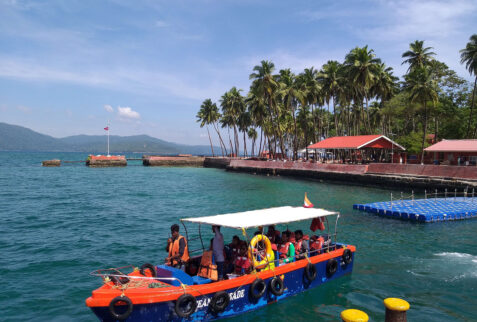 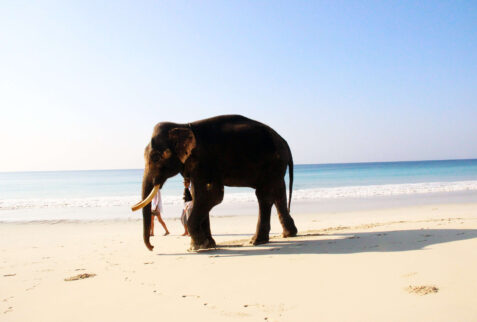 Situated on the ancient trade route between India and Myanmar, the Andamans were visited by the navy of the English East India Company in 1789, and in 1872 they were linked administratively by the British to the Nicobar Islands. The two sets of islands became a union territory of the Republic of India in 1956. The territory has for more than a century been recognized for its indigenous communities, which have ardently avoided extensive interaction with ethnic outsiders.

The capital of Andaman and Nicobar Islands, Port Blair is a poignant reminder of the many sacrifices of freedom fighters. The Cellular jail here is perhaps one of the most infamous remnants of India’s struggle for independence. The main motive of the establishment of this prison was the solitary confinement of the prisoners. The wings were built in a manner that the face of each cell only saw the back of the cell opposite to it. Many freedom fighters were incarcerated in this prison colony including Veer Savarkar and Batukeshwar Dutt. Port Blair is also a gateway to other tourist attractions in Andaman and Nicobar Islands, due to its accessibility from the mainland. Ferries operate mainly from Port Blair to other islands. Havelock islands is home to Radhanagar beach, one of the most popular beaches in India, and also awarded the best beach in Asia by TIME magazine in 2004. The beach is situated around a distance of 12 kilometers from the Havelock islands and is a must-visit site. The waters are sparkling blue and devoid of any wave action. There are a huge number of activities that one can do like scuba diving, snorkeling, boating, fishing, etc. The beach is especially popular for couples as it is almost vacant and the serene environment adds to the romance. One can also enjoy elephant rides here. Baratang Island is a must-visit site for all the people who are planning their itinerary for the Andaman and Nicobar islands. The boat ride is covered with a canopy of the forest which is also home to the indigenous ‘Jarwa’ tribe. However, one needs to be careful of the sea crocodiles and should not go near the water. The Limestone caves here will immediately gather your attention as the erosion has formed some unique shapes. Neil island is famous for its coral reefs and white shores. The best time to visit its beaches is during the mornings and evenings. The morning time is especially good for the people who would like to go snorkeling and enjoy the view of the coral reefs located here. Because of the beauty of the reefs located here, Neil islands are often termed as the coral capital of Andaman. Do not worry if you’re not much of a snorkeling enthusiast, you can enjoy the beach simply by carrying a hammock and a book and enjoy the calm and cool sea breeze and indulge yourself. There are a number of benches for strollers to rest their feet and local vendors who sell coconut water. Ross islands are famous for the ruins of the Penal colony that precedes the cellular jail or the Kaala Paani. The jail was formerly used to incarcerate political prisoners and we can still see the ruins of the gallows on this island. The jail had many notable political prisoners from India’s struggle for independence. The island also has ruins of British’s opulent colonial past in the form of a bakery, bungalows, etc. The place no matter how notorious it was during the colonial period is a picturesque location that is one of the most important tourist destinations in the Andaman and Nicobar Islands.