Varanasi - The City of Shiva

Varanasi is located on the banks of the famous and mighty river Ganges. Ganges has a great belief attached to it by followers of Hinduism. It is believed that the river washes away the sins on taking a dip in the river. Varanasi is famously called the city of temples and learning. Varanasi is a mixture of religion, philosophy, culture and crafts.

Varanasi, also known as Kashi and Banaras, is one of the oldest continuously inhabited cities on earth. Situated in Uttar Pradesh on the banks of the river Ganga, Varanasi is among the most revered religious destinations in India.
The city gets its name from two rivers — Varuna and Assi — which meet here. The word Kashi is derived from the word ‘Kas’ which means to shine. Varanasi is famous for the bathing ghats along the banks of river Ganga. Pilgrims throng these ghats to take a holy dip to wash themselves of their sins. Varanasi has been synonymous with the majestic river Ganga and its numerous rivulets. The Ganga Aarti held every evening at Dasashwamedha Ghat is a sight to behold. 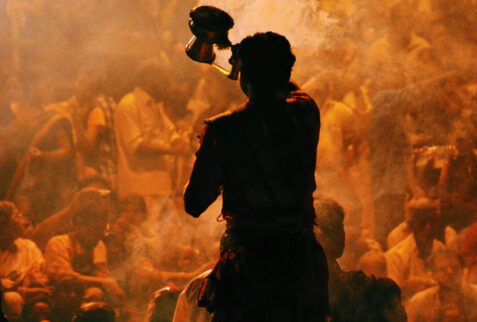 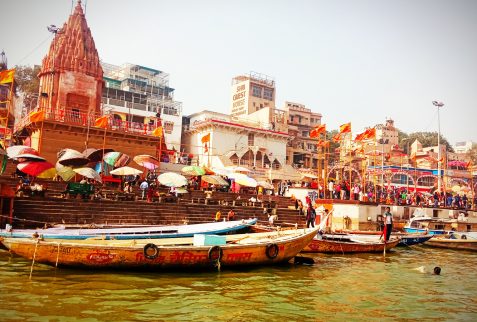 Varanasi, also known as Kashi and Banaras, is one of the oldest continuously inhabited cities on earth. Situated in Uttar Pradesh on the banks of river Ganga, Varanasi is among the most revered religious destinations in India.

The city gets its name from two rivers — Varuna and Assi — which meet here. The word Kashi is derived from the word ‘Kas’ which means to shine. Varanasi is famous for the bathing ghats along the banks of river Ganga. Pilgrims throng these ghats to take a holy dip to wash themselves of their sins. Varanasi has been synonymous with the majestic river Ganga and its numerous rivulets. The Ganga Aarti held every evening at Dasashwamedha Ghat is a sight to behold.

The Kashi Vishwanath temple is one of the 12 Jyotirlingas, the holiest of the pilgrimages dedicated to Lord Shiva.

Varanasi is an important destination among Hindus as they believe those who die in Varanasi attain salvation. Many people like to spend their old age in this holy city and prefer to die here. Varanasi is also a preferred site for immersing the ashes of the dead in the river Ganga. Performing funeral rites and cremation in the pyres are common sights here.

BEST PLACES TO VISIT IN VARANASI

Varanasi has numerous ashrams around the ghats. Several hotels are located near the ghats and offer a beautiful view of the Ganga. Affordable hotels and lodgings are available in the interior sections of the city. The hotels also provide travel and medical assistance to the guests. The city gets hot and humid in summer but is quite cool during the nights.

Assi Ghat is the southernmost ghat in Varanasi. It is one of the biggest ghats of Varanasi and the most popular one. To most visitors to Varanasi, it is known for being a place where long-term foreign students, researchers, and tourists live. Assi Ghat is one of the ghats often visited for recreation and during festivals. On typical days about 300 people visit every hour in the mornings, and on festival days 2500 people arrive per hour. Most of the people visiting the ghat on usual days are students from the nearby Banaras Hindu University. The ghat accommodates about 22,500 people at once during festivals like Shivratri.[3] During the iconic Dev Deepawali festival, more than 500,000 tourists visit the ghat. There are a lot of activities for tourists to engage in at the ghat. Visitors can go for boat rides, go up in a hot-air balloon for an aerial view of Assi ghat, enjoy the daily talent show in the evening or eat at one of the many restaurants and cafes in the area.

Sarnath is a place located 10 kilometers northeast of Varanasi near the confluence of the Ganges and the Varuna rivers in Uttar Pradesh, India. The Deer Park in Sarnath is where Gautama Buddha first taught the Dharma, and where the Buddhist Sangha came into existence through the enlightenment of Kondanna (Sanskrit: Kauṇḍinya).

Singhpur, a village approximately one kilometer away from the site, was the birthplace of Shreyansanath, the Eleventh Tirthankara of Jainism. A temple dedicated to him is an important pilgrimage site. Also referred to as Isipatana, this city is mentioned by the Buddha as one of the four places of pilgrimage his devout followers should visit.[1] It was also the site of the Buddha’s Dhammacakkappavattana Sutta, which was his first sermon after attaining enlightenment, in which he explained the four noble truths and the teachings associated with them.

Dashashwamedh Ghat is the main ghat in Varanasi on the Ganga River in Uttar Pradesh. It is located close to Vishwanath Temple and is probably the most spectacular ghat. Two Hindu legends are associated with it: according to one, Brahma created it to welcome Shiva, and in another, Brahma sacrificed ten horses during Dasa-Ashwamedha yajna performed here.

The present ghat was built by Peshwa Balaji Baji Rao in the year 1748. A few decades later, Ahilyabahi Holkar, the Queen of Indore rebuilt the ghat in the year 1774. Close to the ghat, overlooking the Ganga lies the Jantar Mantar, an observatory built by Maharaja Jai Singh of Jaipur in the year 1737. The Ganga aarti of Varanasi is a shining beacon of devotion and bliss that makes us experience the divinity in and around us. For ages, no day has gone by when the holy Ganga River has not been adored. It is one of the must-see activities included in every traveler’s itinerary, and people from all walks of life visit the city with the desire of beholding the Ganga aarti. The priests in charge of performing the aarti sport dhoti and kurta well-tied with a long gamcha (or towel). They prepare the set-up by gathering five elevated planks, a layered brass lamp, the idol of Ganga Devi, flowers, incense sticks, conch shells, and other ritual paraphernalia. Eager devotees throng the site from across the city to witness the awe-inspiring spectacle; many others take a boat ride from the opposite banks of Ganga River and get the boat parked on the banks of Dashashwamedh ghat. Only the learned pundits of Vedas and Upanishads are involved in performing the aarti, and they are headed by the priest of Gangotri Seva Samiti.

Standing on the western bank of India’s holiest river the Ganges, Varanasi is the oldest surviving city of the world and the cultural capital of India. It is in the heart of this city that there stands in its fullest majesty the Kashi Vishwanath Temple in which is enshrined the Jyotirlinga of Shiva, Vishweshwara, or Vishwanath. Here gravitate the teeming millions of India to seek benediction and spiritual peace by the darshan of this Jyotirlinga which confers liberation from the bondage of Maya and the inexorable entanglements of the world. A simple glimpse of the Jyotirlinga is a soul-cleansing experience that transforms life and puts it on the path of knowledge and bhakti. Vishweshwara Jyotirlinga has a very special and unique significance in the spiritual history of India. Tradition has it that the merits earned by the darshan of other jyotirlinga scattered in various parts of India accrue to devotees by a single visit to Kashi Vishwanath Temple.

BEST PLACES TO EAT IN VARANASI

Food in Varanasi is basically traditional, plain, and simple. Roof-top restaurants offering homemade food are also available. The restaurants and bars (found in some hotels) serve a variety of cuisines. Restaurants located closer to the ghats cater more to foreign tourists. To get the taste of authentic Banarasi food, head to the main market area.

The city is also known for its sweetmeats. Rabri Malai Balai is a popular dessert. You can’t leave Varanasi without trying street food specialties like aloo chat and Panipuri. But the one thing you must try here is the famous Banarasi Paan (mixture of betel nut leaves, Areca nut, tobacco, and lime), made even more popular by Bollywood movies and songs.

The famous Bhang is a potent, powdered form of cannabis often mixed into lassis, and called Bhang Lassi. As Varanasi is a major center of Shiva worship, it is offered to the Lord in form of prasad. It can be quite intoxicating. Thandai is a cool milk-based drink made with pistachios, almonds, and saffron served with a large dollop of malai (cream). You can try Thandai and Lassi at stores located near the Godowlia area. 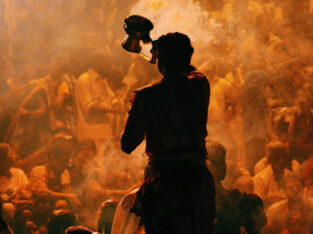 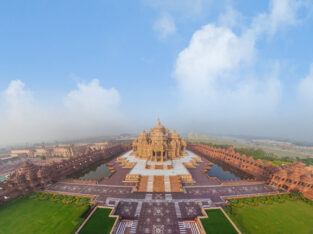 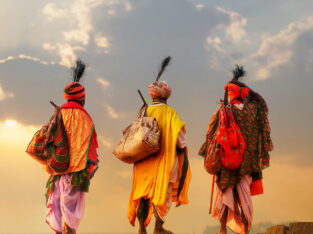 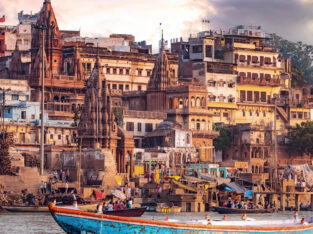