The city’s colorful streets ebb and flow with a heady brew of old and new. Buses dodge dawdling camels, cycle-rickshaws leisurely hold-up swarms of motorbikes, buzzing autorickshaws hawk for unhurried walkers. In the middle of this cacophony , the splendors of Jaipur’s majestic past are islands of relative calm evoking a different pace and another world.

At the city’s heart, the City Palace continues to house the former royal family; the Jantar Mantar, the royal observatory, maintains a heavenly aspect; and the honeycomb Hawa Mahal gazes on the bazaar below. And just out of sight, in the arid hill country surrounding the city, is the fairy-tale grandeur of Amber Fort, Jaipur’s star attraction.

A complex of courtyards, gardens, and buildings, the impressive City Palace is right in the center of the Old City. The outer wall was built by Jai Singh II, but within it the palace has been enlarged and adapted over the centuries. There are palace buildings from different eras, some dating from the early 20th century. It is a striking blend of Rajasthani and Mughal architecture. The price of admission includes entry to Royal Gaitor and the Cenotaphs of the Maharanis, as well as to Jaigarh, a long climb above Amber Fort.

Jaipur’s most distinctive landmark, the Hawa Mahal is an extraordinary pink-painted, delicately honeycombed hive that rises a dizzying five storeys. It was constructed in 1799 by Maharaja Sawai Pratap Singh to enable ladies of the royal household to watch the life and processions of the city. The top offers stunning views over Jantar Mantar and the City Palace in one direction and over Sireh Deori Bazaar in the other. There’s a small museum (open Saturday to Thursday), with miniature paintings and some rich relics, such as ceremonial armor, which help evoke the royal past.

Claustrophobes should be aware that the narrow corridors can sometimes get extremely cramped and crowded inside the Hawa Mahal.

Adjacent to the City Palace is Jantar Mantar, an observatory begun by Jai Singh II in 1728 that resembles a collection of bizarre giant sculptures. Built for measuring the heavens, the name is derived from the Sanskrit yantra mantra, meaning ‘instrument of calculation, and in 2010 it was added to India’s list of Unesco World Heritage Sites. Paying for a local guide is highly recommended if you wish to learn how each fascinating instrument works. Jai Singh liked astronomy even more than he liked war and town planning. Before constructing the observatory he sent scholars abroad to study foreign constructs. He built five observatories in total, and this is the largest and best-preserved (it was restored in 1901). Others are in Delhi, Varanasi and Ujjain. No traces of the fifth, the Mathura observatory, remain.

Piercing the skyline near the City Palace is this unusual minaret, erected in the 1740s by Jai Singh II’s son and successor Iswari. The entrance is around the back of the row of shops fronting Chandpol Bazaar – take the alley 50m west of the minaret along the bazaar or go via the Atishpol entrance to the City Palace compound, 150m east of the minaret. You can spiral to the top of the 43m minaret for excellent views. Iswari ignominiously killed himself by snakebite (in the Chandra Mahal) rather than face the advancing Maratha army – his 21 wives and concubines then did the necessary noble thing and committed Jauhar (ritual mass suicide by immolation) on his funeral pyre.

This museum is housed in the spectacularly florid Albert Hall, south of the Old City. The building was designed by Sir Swinton Jacob and combines elements of English and North Indian architecture, as well as huge friezes celebrating the world’s great cultures. It was known as the pride of the new Jaipur when it opened in 1887. The grand old building hosts an eclectic array of tribal dress, dioramas, sculptures, miniature paintings, carpets, musical instruments, and even an Egyptian mummy. 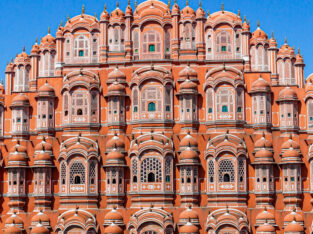 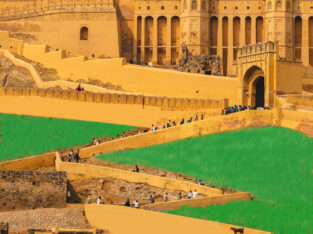 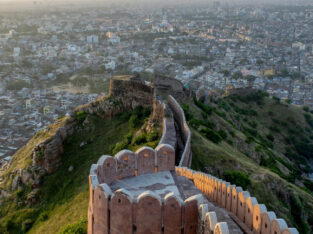 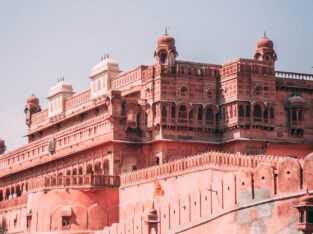 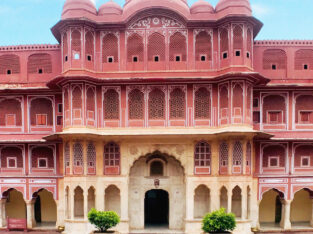 The Jal Mahal palace is an architectural showcase of the Rajput style of architecture (common in Rajasthan) on a grand scale, from Mughal architecture. The building has a picturesque view of Man Sagar Lake, but owing to its seclusion from land is equally the focus of a viewpoint from the Man Sagar Dam on the eastern side of the lake in front of the backdrop of the surrounding Nahargarh (“tiger-abode”) hills. The palace, built-in red sandstone, is a five-storied building, of which four floors remain underwater when the lake is full and the top floor is exposed citation needed. One rectangular Chhatri on the roof is of the Bengal type. The chhatris on the four corners are octagonal. The palace had suffered subsidence in the past and also partial seepage (plasterwork and wall damage equivalent to rising damp) because of waterlogging, which has been repaired under a restoration project of the Government of Rajasthan. Nahargarh Fort stands on the edge of the Aravalli Hills, overlooking the city of Jaipur in the Indian state of Rajasthan. Along with Amer Fort and Jaigarh Fort, Nahargarh once formed a strong defense ring for the city. The fort was originally named Sudershangarh, but it became known as Nahargarh, which means ‘abode of tigers. The popular belief is that Nahar here stands for Nahar Singh Bhomia, whose spirit haunted the place and obstructed the construction of the fort. Nahar’s spirit was pacified by building a temple in his memory within the fort, which thus became known by his name.