Jodhpur is a very popular tourist destination. The landscape is scenic and mesmerizing. Jodhpur city has many beautiful palaces and forts such as Mehrangarh Fort, Jaswant Thada, Umaid Bhavan Palace, and Rai ka Bag Palace. Other charms of Jodhpur include the Government museum and its beautiful Umed garden. The city is known as the “Sun City” because of its bright and sunny weather throughout the year. Read on for more Jodhpur information. 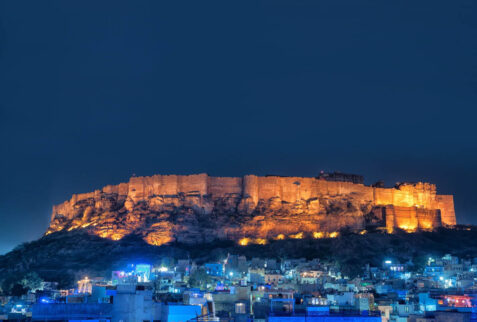 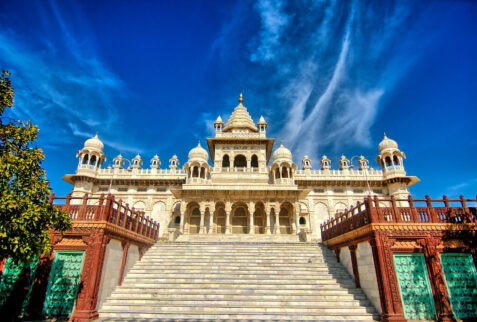 Modern Jodhpur stretches well beyond the city walls, but it’s the immediacy and buzz of the old Blue City and the larger-than-life fort that capture travelers’ imaginations. This crowded zone is also Jodhpur’s main tourist area. Areas of the old city further west, such as Navchokiya, are just as atmospheric, with far less bustling.

These are our favorite local haunts, touristy spots, and hidden gems throughout Jodhpur.

Rising perpendicular and impregnable from a rocky hill that itself stands 120m above Jodhpur’s skyline, Mehrangarh is one of the most magnificent forts in India. The battlements are 6m to 36m high, and as the building materials were chiseled from the rock on which the fort stands, the structure merges with its base. Still run by the Jodhpur royal family, Mehrangarh is packed with history and legend.

Mehrangarh’s main entrance is at the northeast gate, Jai Pol. It’s about a 300m walk up from the old city to the entrance, or you can take a winding 5km autorickshaw ride.

Situated 9km north of the center of Jodhpur, Mandore was the capital of Marwar prior to the founding of Jodhpur. Its gardens, complete with rock terraces and home to playful grey langurs, contain a variety of dark-red cenotaphs of Jodhpur’s rulers.

Cenotaphs include the soaring but unkempt Chhatri of Maharaja Dhiraj Ajit Singh (1793), which combines Buddhist and Jain elements in its architecture. It’s an enormous edifice with a high shikhara (spire), a pillared and domed fore chamber, and fine sculptures including small carved elephants and lions. The memorial also marks the spot where 64 queens and concubines committed Sati ritual suicide of widow on husband’s funeral pyre) on Ajit Singh’s death in 1724. The opposite is the 1720 Chhatri of Maharaja Dhiraj Jaswant Singh I, with a large pavilion and a vast dome on an octagonal base. It achieves a remarkable symmetry, with a gallery supported by huge pillars. The remaining cenotaphs date to the 17th century.

The fort’s museum encompasses its former palace and is a superb example of Rajput architecture. The network of courtyards and halls features stone-lattice work so finely carved that it often looks more like sandalwood than sandstone. The galleries around Shringar Chowk (Anointment Courtyard) display India’s best collection of howdahs (seat for carrying people on an elephant’s back) and Jodhpur’s royal palanquin collection. The superb audio guide is included with your ticket, but bring an ID or a credit card as a deposit.

One of the two galleries off Daulat Khana Chowk displays textiles, paintings, manuscripts, headgear, and the curved sword of the Mughal emperor Akbar; the other gallery is the armory. Upstairs is a fabulous gallery of miniature paintings from the sophisticated Marwar school and the beautiful 18th-century Phul Mahal (Flower Palace), with 19th-century wall paintings depicting the 36 moods of classical ragas as well as royal portraits; the artist took 10 years to create them using a curious concoction of gold leaf, glue and cow’s urine. Takhat Vilas was the bedchamber of Maharaja Takhat Singh (r 1843–73), who had just 30 maharanis and numerous concubines. Its beautiful ceiling is covered with Christmas baubles. You then enter the extensive zenana (area in an upper-class home where women are secluded), the lovely latticed windows of which are said to feature more than 250 different designs (and through which the women could watch the goings-on in the courtyards). Here you’ll find the Cradle Gallery, exhibiting the elaborate cradles of infant princes, and the 17th-century Moti Mahal (Pearl Palace), which was the palace’s main durbar hall (royal reception hall) for official meetings and receptions, with gorgeously colorful stained glass.

This milky-white marble memorial to Maharaja Jaswant Singh II, sitting above a small lake 1km northeast of Mehrangarh, is an array of whimsical domes. It’s a welcome, peaceful spot after the hubbub of the city, and the views across to the fort and over the city are superb. Built in 1899, the cenotaph has some beautiful jalis (carved marble lattice screens) and is hung with portraits of Rathore rulers going back to the 13th century. 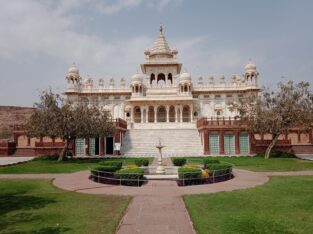 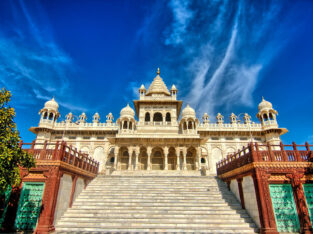 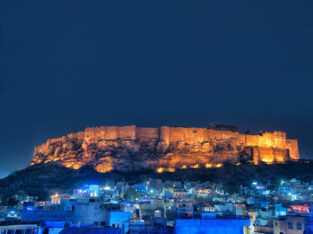