The state of Jammu & Kashmir (J&K) brings together three incredibly different worlds. Jammu and Katra, in the south, are the state's rail hubs and a major draw for domestic pilgrims. Kashmir Valley is India's Switzerland, attracting local tourists seeking cool summer air, alpine scenery and Srinagar’s romantic houseboat accommodation. And then there's the Himalayan land of Ladakh, which for most foreigners is J&K’s greatest attraction. Its ethnolinguistically Tibetan people are predominantly Buddhist; their timeless monasteries are set between arid canyons and soaring peaks, while emerald-green villages nestle photogenically in highland deserts.

Kashmir is politically volatile, with July and August often the “season” for shutdowns, demonstrations and curfews. Indeed, arguments over Kashmir’s status caused three 20th-century wars. Ladakh is altogether different, a calm oasis where your main concern will be high-altitude acclimatization. Note that Ladakh is entirely inaccessible by road outside the summer season.

Top Attractions in Kashmir and Ladakh

Over 15km around, Dal Lake is Srinagar’s jewel, a vast sheet of water reflecting the carved wooden balconies of the houseboats and the misty peaks of the Pir Panjal mountains. Flotillas of gaily-painted shikaras (gondola-like taxi boats) skiff around the lake, transporting goods to market, children to school and travellers to delightful houseboats inspired by originals from the Raj era.
If you get up early, you can paddle out to see the floating flower and vegetable market: a colourful spectacle, but one where you can expect plenty of attention from souvenir vendors.

Bearing a passing similarity to the Potala Palace in Lhasa (Tibet), this nine-storey dun-coloured edifice is Leh’s dominant structure and architectural icon. It took shape under 17th-century king Singge Namgyal but has been essentially unoccupied since the Ladakhi royals were stripped of power and shuffled off to Stok in 1846. Today the sturdy walls enclose some photo exhibition spaces and a small prayer room, but the most enjoyable part of a visit is venturing to the uppermost rooftops for the view.

Interesting structures ranged around the palace’s base include the prominent Namgyal Stupa, the colourfully muralled Chandazik Gompa and Soma Gompa, once home to the monastic printing press. Also nearby is the 1430 Chamba Lhakhang, with its colourful three-storey Buddha and medieval mural fragments. Don’t count on any of these being open though.

Behind Leh’s central Jamia Masjid, winding alleys and stairways burrow between and beneath a series of old mud-brick Ladakhi houses and eroded chortens. The alleys themselves are a large part of the attraction, but some buildings have been particularly well restored, notably the pair of 17th-century mansions now housing the interesting LAMO arts centre.

To get a taste, walk past the Dhyani Buddha–fronted building that houses Lala’s Art Cafe, turn hard left on an easily missed passageway beside a rigsum gonbo (represented by a trio of yellow, white and blue mini-stupas) and tunnel under a building past a magenta door marked ‘Chamba Gonba’ (normally locked). Wind up a rocky slope to LAMO and beyond to the Old Town Cafe and the Leh Palace just above. 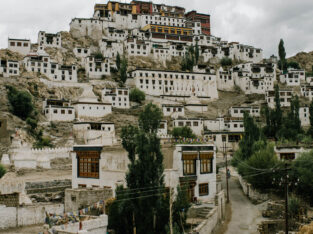 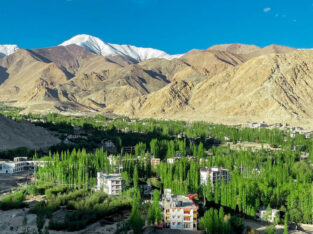 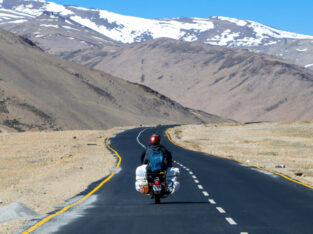