Architectural wonders, exquisite handicrafts, colorful culture, and tempting cuisine are a few of the many highlights of this magnificent state. Set amidst a vast desert, the magical land of Rajasthan is synonymous with romance and chivalry. As one of the best travel agencies in Amsterdam for Indian tours, we at We Fly India take immense pride in helping you explore royalty like never before. With our Rajasthan tour packages, travel back in time and in the era of the reign of the crown.

Here are the Top attractions in Rajasthan:

Also called the Pink City, Jaipur is the capital of the royal state of Rajasthan. Along with Delhi and Agra, Jaipur forms the Golden Triangle and hails as one of the most famous tourist circuits in the country. Rajputs ruled Jaipur for many centuries and developed as a planned city in the 17th century AD. With the old city surrounded by walls and gates decorated with drawings on the backdrop of a beautiful pink hue, Jaipur, the pink city, successfully retains its old-world charm. Home to a few UNESCO World Heritage sites, including Amer Fort and Jantar Mantar, Jaipur holds many magnificent forts, palaces, temples, and museums and brims with bustling local bazaars where you can shop to your heart’s content. The city is also very well known for its local food, and the most famous dishes include the Ghewar, Pyaaz Kachori, and Dal Baati Churma. The city also hosts the Jaipur Literary Festival, which is Asia’s biggest festival of its kind.

Udaipur, also known as the City of Lakes, is a popular tourist destination state of Rajasthan. It is surrounded by the beautiful Aravalli Hills in all directions, this ‘Venice of the East has mesmerizing temples and breathtaking Mewar architecture in the backdrop of lakes which makes it a must-visit destination in India.  A boat ride through the serene waters of Lake Pichola will be enough to prove to you why Udaipur is the pride of Rajasthan. Located in a valley and surrounded by four lakes, Udaipur justifies all names ever offered to its charm from ‘Jewel of Mewar’ to ‘Venice of the East’. The Lake Palace hotel is something that offers the city a visual definition. The revered Nathdwara temple is about 60 km from Udaipur.

Jaisalmer is a prominent tourist spot located in the northwestern state of Rajasthan in India. It is known as the ‘golden city’ due to its golden dunes and castles clad in golden honey sandstone. Jaisalmer is adorned with lakes, ornate Jain temples, and Havelis. Climb onto the camel saddle and make your way through this desert to camp under the starry night sky for an unforgettable experience. The Jaisalmer Fort stands as a citadel with narrow alleys inhabited by people for generations and shops selling colorful handicrafts.
Jaisalmer is a town, and to reach the Sand Dunes, travelers have to take a jeep safari followed by a camel ride. Thus, Jaisalmer is an amalgamation of exotic Indian desert culture, heritage, and adventure.
Mount Abu

The only hill station of Rajasthan, Mount Abu is located in the Aravali range. The most important attraction, however, is undoubtedly the Dilwara temples, which is one of the most stunning pieces of architecture in the country.  Travelers can enjoy calm and relaxed boating in Nakki Lake, and a view of the sunset from the vista points. The restaurants and eateries around the lake are great places to eat local food and chill. The highest peak of the Aravali Range – Guru Shikhar also lies in Mt. Abu. Mount Abu Forest Sanctuary with an abundance of flora and fauna is also a highlight. The exceptionally intricate architecture of the Dilwara temples is of course the main attraction here, and you can easily spend hours wondering how these temples were built over 2 centuries, almost 1000 years back. The temples were specifically made so that they are plain from the outside to avoid the attraction of plunderers, and have withstood the test of time extremely well.

The former capital of Marwar, Jodhpur, is one of the most enchanting cities of Rajasthan, with its mighty Mehrangarh fort overlooking the city. The city is called the Blue City as it looks completely blue from an aerial view because of its blue walls and blue houses. Jodhpur is also famous for its temples, lakes, and snacks. The magic lies in the streets of the old city itself, with hundreds of shops, guesthouses, eating joints, and vendors making it a bustling chirpy town, especially near the landmark clock tower and Sardar Market.
Nearby Jaswant Tada and Umaid Bhawan Palace are also among the top attractions in Jodhpur.
Seen in the backdrop of the movie, The Dark Knight Rises, Jodhpur attracts hundreds of thousands of visitors from all over the world. Jodhpur is conveniently located in the center of Rajasthan making it easier for people visiting Jodhpur to explore other destinations of the state.

Rajasthan has a colourful and lively vibe that revolves around the shades of royal Rajputana culture and heritage. It is a place that offers a perfect blend of mystical palaces, majestic lakes, charming streets, mighty Aravali peaks and everything else in between. 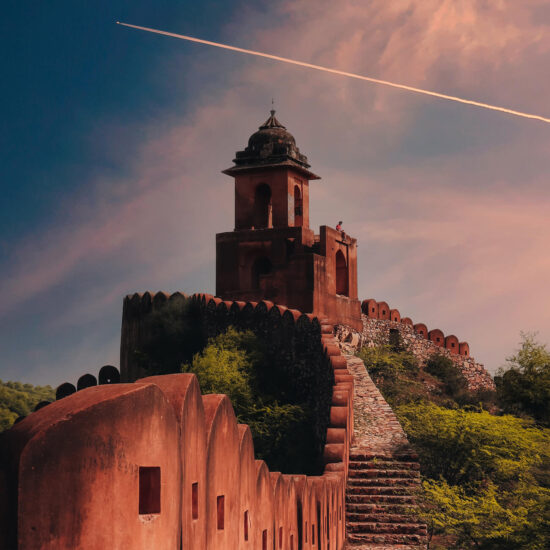 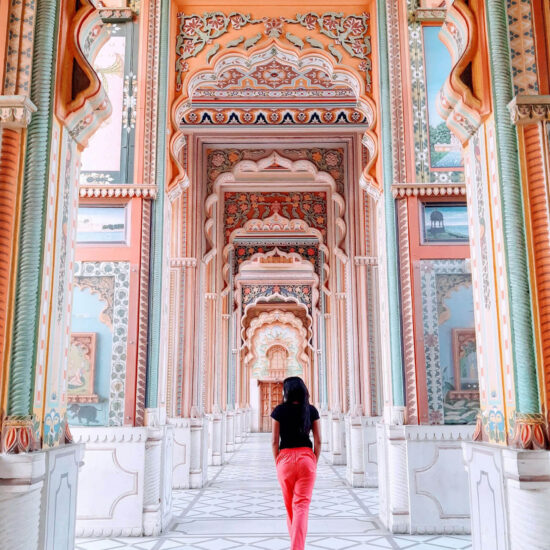 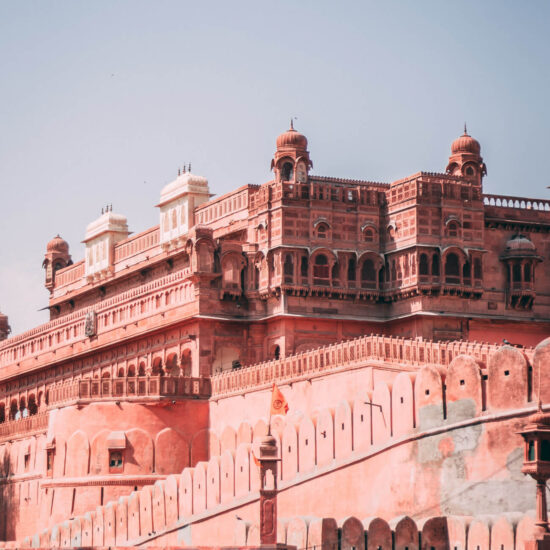 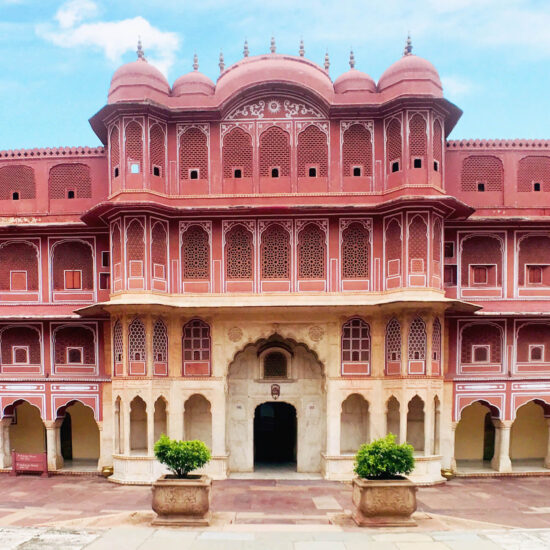 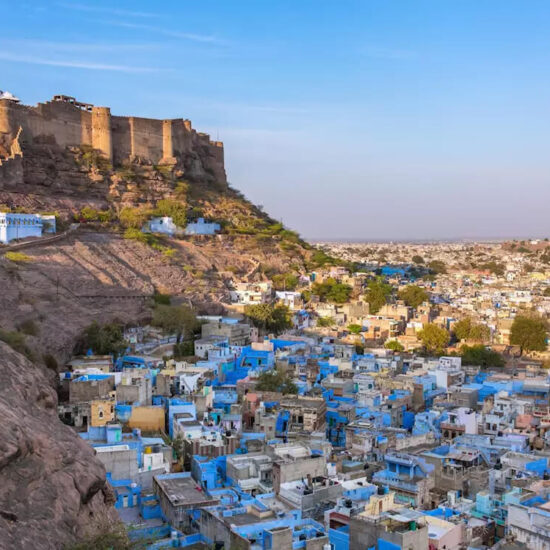 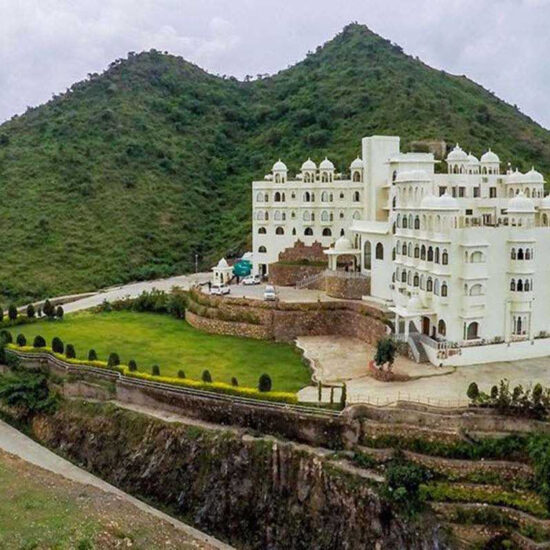