There are very few places in the world as enchanting as Ladakh and its capital Leh. Its mountainous landscapes, deep blue lakes, and scenic road journeys have been luring travelers from all around the world. Alluring beauty aside, there are plenty of attractions to take in, from beautiful monasteries and elegant palaces to quaint villages and high mountain passes. Want to know which of these amazing places should be on your bucket list? Check out our cherry-picked list of the top places to visit in Ladakh.

Sitting on top of a hill, Leh Palace is one of the finest examples of medieval Tibetan architecture. The palace is made of stones, wood, mud, and sand and is often compared to the world-famous Potala Palace in Lhasa. The walls of the palace provide warmth in winters and create a cool ambiance in summers. The interiors are adorned with crowns, ceremonial dresses, jewelry, and artistic paintings. Some as old as 450 years and made from colors derived from powdered stones and gems. Murals etched on the walls depict glory days of the past. If that’s not fascinating enough, the palace provides spectacular views of the surrounding mountain range and the valley below. There’s no doubt why this makes it to our list of top 10 places to visit in Ladakh.

The Shanti Stupa is a white-domed monument built on top of a steep hill. Facing snow-capped peaks, it was made by an interesting blend of Japanese Buddhists along with the locals. It marked and celebrated 2500 years of Buddhism and was also meant to be a symbol of peace. The stupa holds a golden Buddha statue and images of his birth and death.

Being at a vantage point, the stupa affords unadulterated views of the valley below. Lit up at night, it acquires a beauty of its own. If you want to witness a magical sunrise or sunset, this is one of the best places to visit in Ladakh. Nubra, also called Dumra, is a historical region of Ladakh, that is currently administered as a subdivision and a tehsil in the Leh district. Its inhabited areas form a tri-armed valley cut by the Nubra and Shyok rivers. Its Tibetan name Dumra means a “valley of flowers”. Panamik village is the last settlement in the northern end of the Nubra valley and is open to tourists. Nubra’s stark landscape, jagged mountains, and altitude attract adventure tourists from across the globe. On the way to Leh, along the Srinagar-Leh highway, lies the Sangam. It is a confluence of two rivers at Nimmu. Breathtaking to witness, here the emerald waters of the Indus merge with the brownish waters of Zanskar. It makes for a spectacular sight, especially for nature lovers. It is one of the top 10 places to visit in Ladakh if you want to see an unforgettable sight of natural wonder. A quaint village between Kargil and Leh. Lamayuru is known for its moon-like terrain, earning it the nickname ‘Moonland’. If that name itself isn’t enough to justify its place on our list of top 10 places to visit in Ladakh, simply read on.

Legend has it that a lama named ‘Naropa’ walked this land when it was submerged underwater. Upon his request, the water receded thus letting him establish the monastery which is now the famed ‘Lamayuru Monastery’. One of the most beautiful monasteries in Ladakh, its interiors are embellished with jaw-dropping paintings and frescoes. A cave next to the prayer hall has statues of Naropa and his disciples, one of the highlights of this shrine. Perched on a hill, the monastery also offers unparalleled views of the moonscapes around it. And just like the moon, the monastery is ‘out of this world’.

Imagine what it would feel like to be on top of the world. No, we are not talking about the arduous climb to Everest. On the way to Nubra Valley, a popular destination in Ladakh lies Khardung La pass – the world’s highest motorable road. It’s located at a staggering altitude of 18,380 feet.

Stop here for a cup of tea and admire the surreal snow-covered landscape around you. This is on the bucket list of everyone who travels to Ladakh. It almost feels like you are at a winter wonderland. This is because everything around you from rocks to roads to mountains is draped in snow. The steep and rugged terrain, winding roads, furious winds, and unpredictable weather mean you will earn bragging rights for making it this far. No wonder it’s a rite of passage and one of the top places to visit in Ladakh for bikers, cyclists, and travel junkies.

Straddling borders with Pakistan, Turtuk is the closest village to the ‘line of control (LOC)’. Located so close to the border, this is the only village that tourists are permitted to visit. The landscape here changes dramatically with barren wastelands giving way to lush greenery, with an abundance of Apricot and Peach fields. Inhabited by a Muslim population, this quaint village is one of the last towns in India to have a prominent Balti culture. Try the delicious Balti cuisine here, especially the Apricot-based stew. With its serene ambiance, scenic vistas, and the aquamarine waters of river Shyok meandering through the village, Turtuk is as heavenly as it gets. It is definitely one of the top offbeat places to visit in Ladakh, where you can soak up the beauty undisturbed by tourist crowds.

Hemis monastery is the largest monastery in Ladakh. It’s widely known for playing host to the popular Hemis festival every June. Its exquisite architecture, serene surroundings, and views of neighboring mountains make it a must-visit on your Ladakh trip.

The monastery has one of the rarest collections of Thangka paintings, murals, Buddhist scriptures, and stupas made of gold and silver. Wonderful paintings of Buddha cover the monastery walls. If you happen to visit during festival time, you can see masked dancers performing, listen to traditional music, watch people strolling about in colorful attires, and gorge on delicious local cuisine.

Tso Moriri is Pangong’s alter ego, similar in its bluish complexion and astounding beauty. It is remotely located higher than Pangong Lake. Accordingly, visited by fewer tourists, and therein lies its appeal. With brownish mountains towering over it on one side and lush green countryside on the other, it is like staring at a live oil painting. Bird enthusiasts have another reason to cheer as the lake attracts a number of migratory birds, right from seagulls, Brahmin ducks, and geese, to the rare and elusive black-necked cranes. One of the best experiences in Ladakh is lying in the desert and gazing at a million stars. You wouldn’t believe us, would you? After all, who expects to find a desert atop the Himalayas? Most of you may not be aware that Ladakh is actually a high-altitude cold desert. It’s more than evident at the super scenic Nubra Valley.

One of the most popular attractions in this valley is the village of Hunder. Every year, this place is swarmed with thousands of travelers, who come to witness sand dunes wrapped around by golden brown mountains.

The desert is also home to the double-humped Bactrian camel, a rare species found only in this region of Ladakh. A ride on the backs of these sturdy animals is surely one of the most memorable experiences to have.

Ladakh is home to many high-altitude lakes, but none can match the grandeur of Pangong Tso. Brought to the limelight by the movie ‘3 Idiots’, it is now the most popular destination in Ladakh.

Flanked by mountains of brownish hues, walking along the banks of the azure blue lake is akin to living in a postcard picture. Its uniqueness though lies with the changing shades of the lake as the day progresses. Be ready to whip out your cameras and catch this mystic phenomenon live. At night, watch the sky blanketed by a million stars as you camp next to the lake. Come night or day, there is always magic in the air at Pangong. 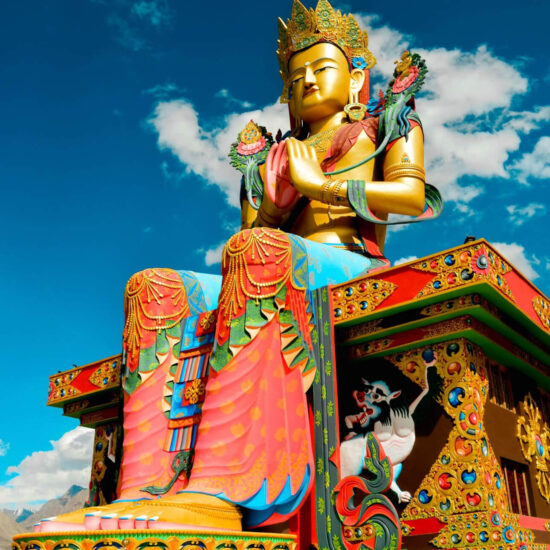 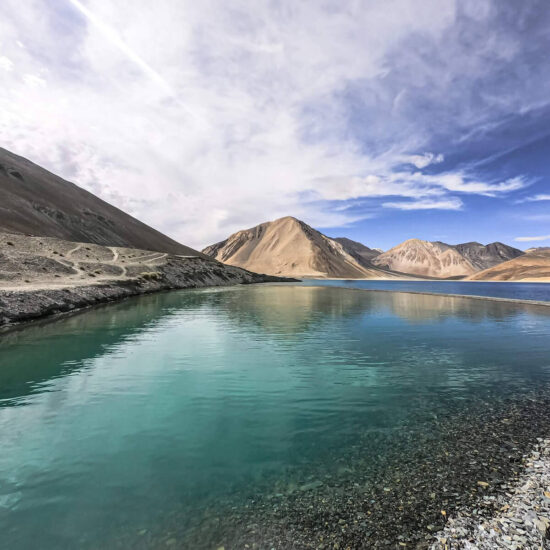 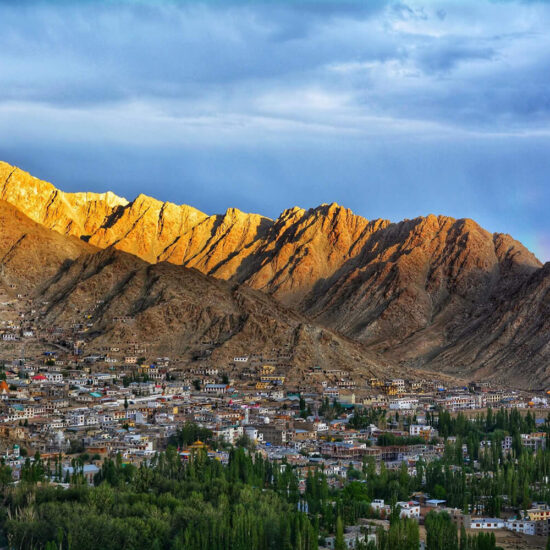 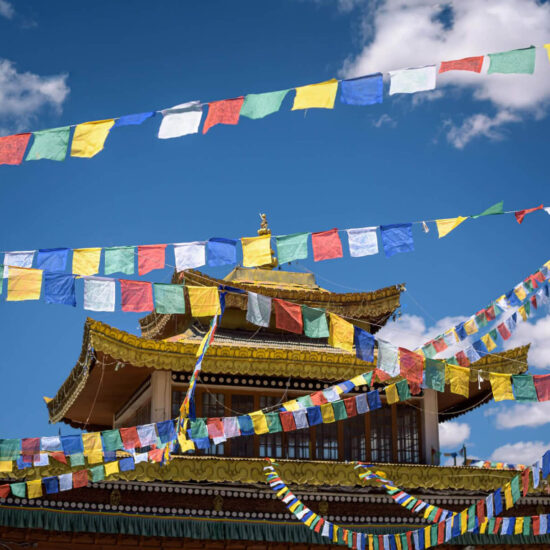 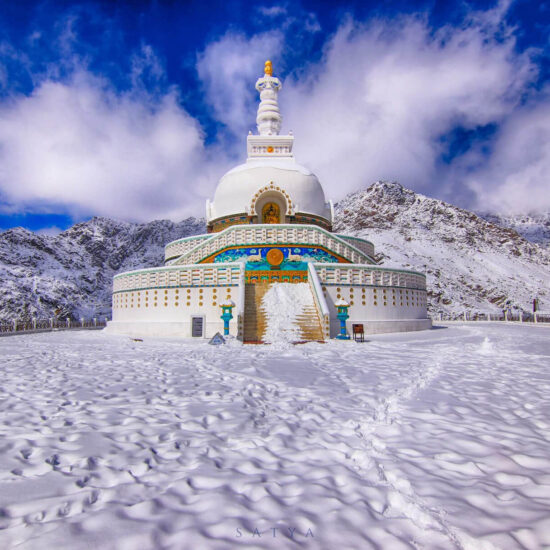